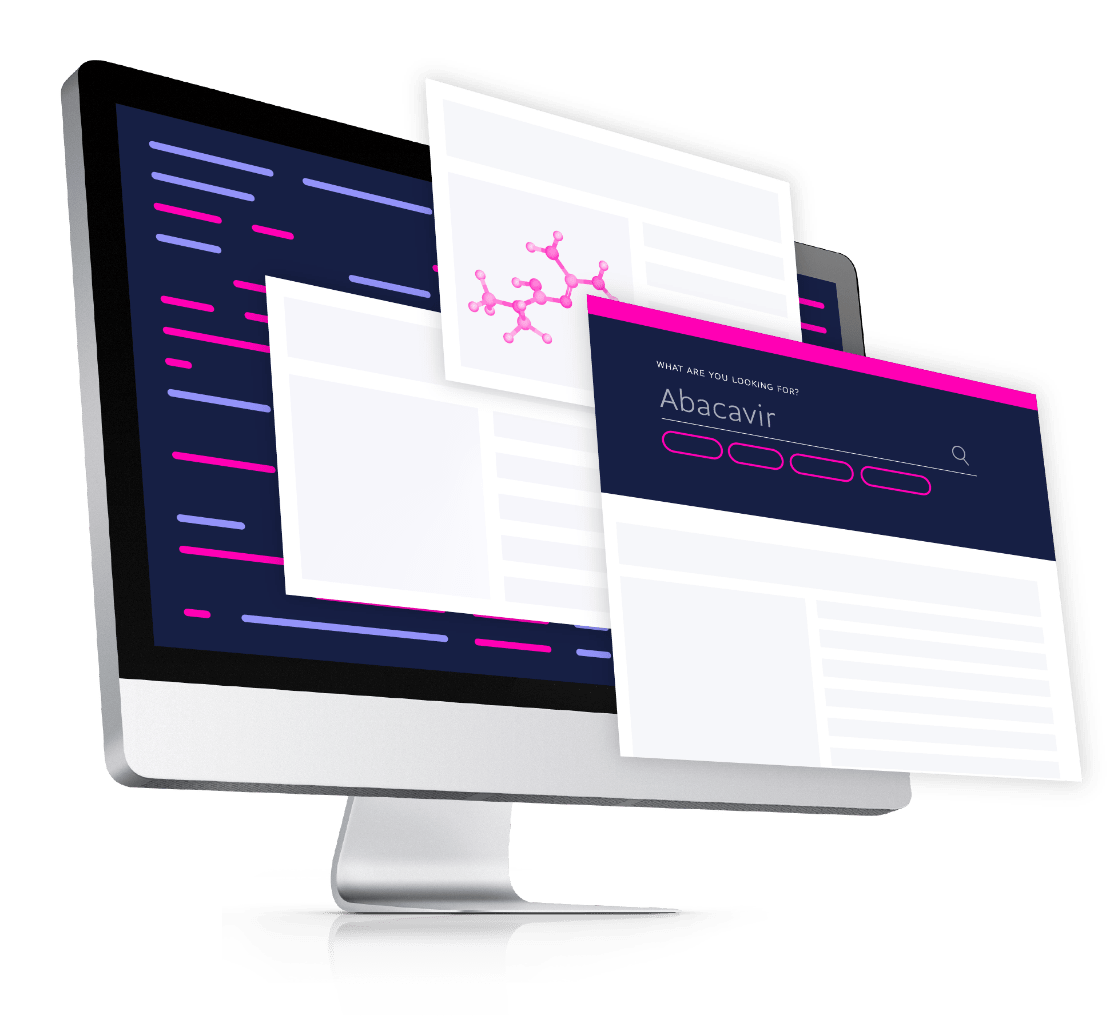 Since DrugBank’s inception 13 years ago, researchers around the world have relied on DrugBank to push forward the fields of bioinformatics, in silico drug discovery and drug repurposing, and artificial intelligence for drug discovery.

With more than 7,000 DrugBank citations, DrugBank is one of the most widely used scientific databases in the world.

Drugs From Discovery
To Approval

Our data provides context for researchers, as well as structured details which capture the information in a format suitable for bioinformatics, data science, and machine learning applications.

Our robust help center features interactive tutorials, reference documentation, as well as a cross-referenced glossary. Or set up a phone call with our product support team.

All DrugBank datasets are available as JSON, XML or SQL and include daily updates.

Since inception, DrugBank has been used by tens of thousands of academic researchers and has been featured in more than 7,000 scientific publications.

Companies and researchers use DrugBank as a key part of their drug repurposing projects. Potential repurposing candidates can be identified using the off-target protein interactions and adverse effects. Detailed pathway information, approved indications and clinical trial indications can be used to identify drugs that are related to the treatment of a specific disease group or use a network-based approach to identify repurposing opportunities.

DrugBank provides curated, connected structured datasets that are machine-learning ready so different algorithms, approaches and features can be explored efficiently. The detailed datasets provide useful labelled datasets for training and evaluating machine learning models, and offer many potential attributes that can be explored for features selection. Our customers use DrugBank to build predictive models for drug targets, side effects, toxicity and drug-drug interactions.

The structured information included in DrugBank supports diverse use cases from medication entry, to annotating genetic testing reports to analyzing de novo mutations in oncogenetics. Companies targeting the advancement of precision medicine use DrugBank to explore drug targets, oncology indications including genetic markers, and drug-drug interactions that could effectively be reduced or altered to create better health outcomes for patients. In a specific use-case, researchers used DrugBank to develop an application that helps physicians search for effective targeted drug therapies for cancer patients based on approved and clinical trials.

+Drugs from Early Stages of Research Through to Approval

The Drug Product dataset provides over 130,000 drug product listings, covering all products approved by the FDA, Health Canad and EMA including withdrawn drug products. Each listing includes the brand or generic name, dosage, dose form, route of administration, codes, labeller, approval status, and marketing start and end date. The drug ingredients are linked with the drug dataset, and all products are linked with approved indications which include links to MedDRA and ICD10.

Our pharmacology dataset includes detailed descriptions of the mechanism of action, metabolism, absorption, distribution, elimination and pharmacokinetic and pharmacodynamic parameters such as half-life, clearance, and LD50.

Drugs are categorized for searching, filtering and comparing drugs. The chemical taxonomy organizes drugs based on the features of the chemical structure; drug categories organize drugs based on class of drug, effect, affected organ systems and targeted proteins the categories are linked with MESH identifiers when available; and, all drugs are also linked with ATC drug classifications.

The Therapeutic Categories are based on the FDA's “Established Pharmacologic Class” (EPC) which is a pharmacologic class associated with an approved indication of an active moiety that the FDA has determined to be scientifically valid and clinically meaningful. We have extended the EPC categories to cover other jurisdictions as well.

We provide you with over 5,600 drug patents, including information on patent ID, grant date, historical expiry date, or estimated future expiry date.

We include data on SNP Mediated Adverse Drug Reactions and SNP Mediated Pharmacological Effects including a description of the effect, affected drugs, references, SNP IDs, and allele name, gene identifier and affected genotype and coverage of predicted markers for some pre-clincal drugs. In addition, the structured indication dataset provides detailed information on genetic variants that are part of the approved indication.

There are over 21,000 drug-protein interactions, covering targets, enzymes, carriers, and transporters. This includes annotations describing the pharmacological action, and the type of interaction (antagonist, agonist, substrate, inhibitor, inducer). Drug targets also include the protein and gene identifiers and sequences and are associated with over 13,000 unique references.

DrugBank offers robust drug metabolism data, including metabolism reactions associated with 110 enzymes. The data includes the type of reaction, the enzymes and other proteins involved and the name and structure of the drug metabolites.

We have manually extracted over 10,000 drug indications from FDA drug labels and scientific publications that cover every FDA and Health Canada approved indications as well as common off-label indications. They include a text description, severity, type of indication, and associated ICD10 and MedDRA identifiers.

We provide a comprehensive list of contraindications and black box warnings manually extracted from FDA drug labels and scientific publications. Each listing includes details about the contraindication, the name of the condition associated with the condtraindication, and associated ICD10 or MedDRA identifiers.

The adverse effects are datasets collected from clinical trial data, drug labels and post-market reporting and include incidence rates when available. Each listing includes the name of the condition, synonyms for the condition and associated ICD10 or MedDRA identifiers.

Montanari et al. developed a predictor to pre-screen drug candidates for their potential to inhibit breast cancer resistance protein (BCRP). They used the DrugBank small molecule and target sets to build a training and validation set for the algorithm. The DrugBank target relationships include information about inhibition which allowed the team to build this dataset easily. The resulting predictor was experimentally verified to be accurate.

Satyanarayana et. al. utilized DrugBank to screen 1400 drugs to help identify novel compounds that could be cyclin dependent kinases (CDKs). CDKs have been known to increase the types and progression of tumours, as well as the invasiveness of certain cancers like leukemia. With the help of the DrugBank database, they were able to identify the top three drugs that could act as inhibitors against CDKs.

Pascal Heitel et al. used virtual screening techniques to analyze marketed drugs in the DrugBank database to identify two drugs that have the potential to modulate the activity of liver X receptor (LXR). The authors used DrugBank to build a dataset of drug structures and compounds that interact with the target of interest to implement an experimental machine learning technique called a self-organizing map.

Using drug profiles from DrugBank, along with genomic data from BioVU, Challa et al., developed an algorithmic approach to help with selecting drugs for repurposing prioritization. Drug repurposing is the practice of using approved drugs to treat something separate from it’s originally approved purpose. It is often accompanied by an unmanageable number of drugs to prioritize (sometimes upwards of 11,000 agents), but with this new approach, the authors were able to select a manageable subset of around 250 drugs to research.

Drug repurposing for chronic myeloid leukemia: in silico and in vitro investigation of DrugBank database for allosteric Bcr-Abl inhibitors

Using virtual screening methods, Singh et al. were able to investigate the DrugBank database for possible drugs that could target the allosteric site of Abl kinase, which is affected when there is a “chromosomal rearrangement resulting in the expression of Bcr-Abl fusion protein with deregulated Abl tyrosine kinase activity”. This rearrangement results in chronic myleoid leukemia (CML). Current approved drugs for CML target the ATP-binding site of Abl kinase, but the body often becomes resistant. They believe by finding drugs that target the allosteric site, which is remote from the ATB-binding site, is useful and through their screening, they were able to find a promising drug combination that could more effectively treat CML.

Using in-house and DrugBank databases, Ngo et al. used virtual screening using prediction models and molecular docking to identify and discover hit compounds to reverse multidrug resistance (MDR). The team utilized the P-gp structure (which plays an important role in MDR) and its binding structure as the predictor for the docking study determining interactions between ligands and receptors. In their study they attempted to “restore cancer cell sensitivity to cytotoxic drugs.

Utilizing drug interactions information on the DrugBank database, Zie et al. were able to build a deep-learning-based model to predict potential interactions. They used interaction prediction “as a binary classification task” and were able to show that the framework predicted more credible interactions than traditional experiments that are often difficult and timely due to data scarcity.

IDICAP: A Novel Tool for Integrating Drug Intervention Based on Cancel Panel

Targeted cancer therapy, a practice that targets the unique mutation profiles in patients, is a challenge for physicians due to the complexity of attempting to prescribe effective unique therapies for each patient. Kosarek and Ho have developed a website that allows users to search for effective drug therapies. The site includes “genes that have been linked to a cancer type” as well as data on specific drugs and clinical trials that can be found within the DrugBank database.

Our products and services can be tailored to your company’s needs. Contact us today to request a demo, and talk about what solution is right for you.